This post explores the use of Linux’ ptrace functionality to step through a complete program execution instruction by instruction, and compares it to a much faster hack involving setting the x86 trap-flag and signal-handlers, which allows observing the execution of a program from within that program.

For some x86 assembler project I wanted to step through the execution of complete programs in order to record the use of every single instruction that it uses. I knew that GDB (the Gnu Debugger) allows stepping through a program instruction by instruction, and a little exploration reveals that the easiest way to script/automate it is to use the Linux functionality upon which GDB is built: ptrace.

Stepping through a program using ptrace

The debuggee must tell Linux to allow tracing it, then will execute execve to replace its process with the program you want to debug. The debuggee will stop at the execve and send a signal to the debugger that allows it to take control of the process.

Meanwhile, the debugger must wait for the child to suspend execution. It can then use Linux’ ptrace functions to observe the debuggee or tell it to continue executing, either normally (PTRACE_CONT), until the next syscall (PTRACE_SYSCALL), or for a single machine instruction (PTRACE_SINGLESTEP). 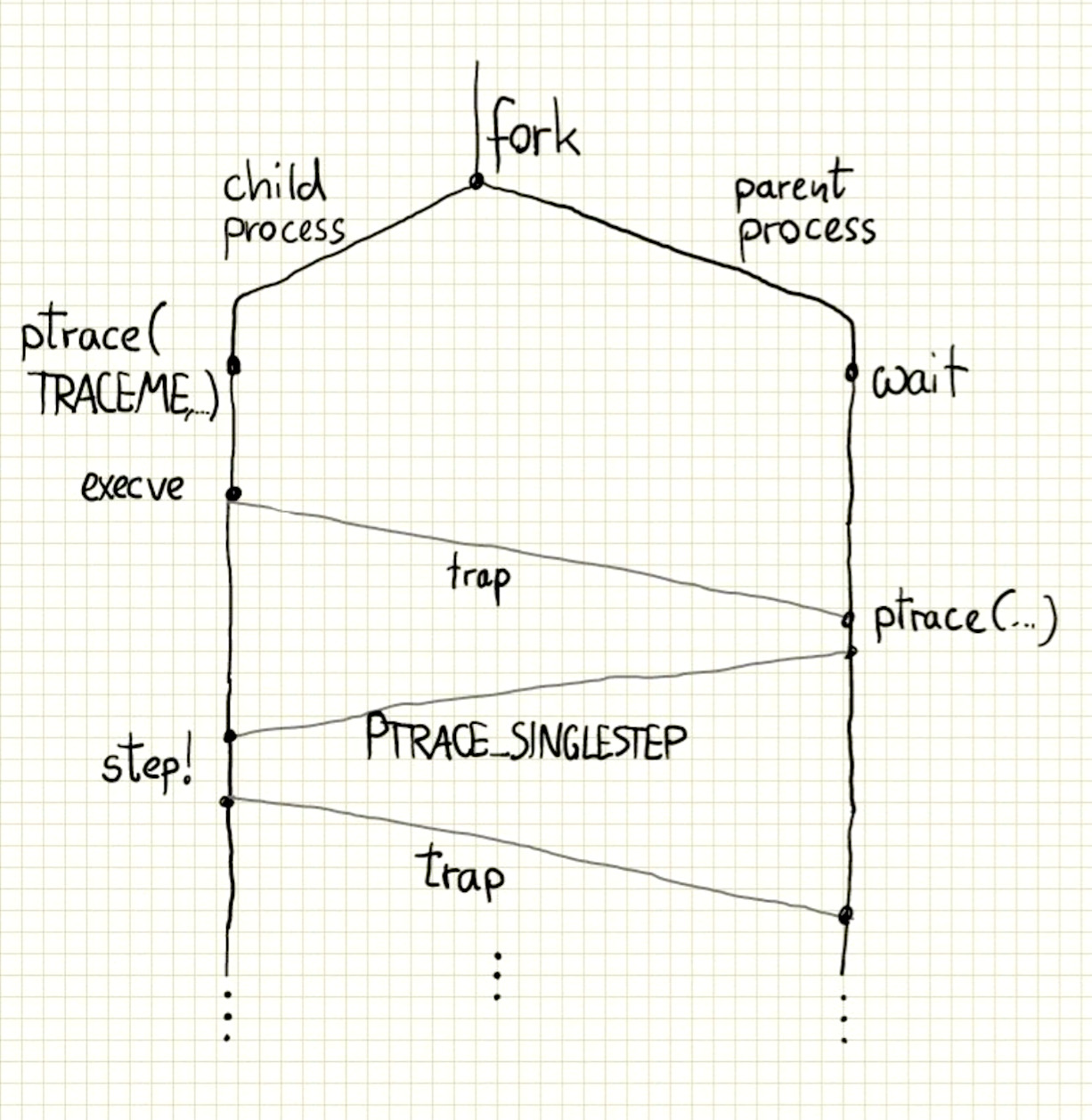 This functionality is what GDB is built on, and it’s also what strace uses, by executing from one system call to the next.

Let’s build a simple test example to see how fast we can execute a program.

To set this up, our main program has to fork to create the debugger and debuggee:

The debuggee has to tell the operating system it wants to be ptraced, and then it has to execute some program.

We don’t use execve (which would trigger the ptrace functionality), because we’re just executing a function. We can trigger the debugger explicitly by executing a debug exception instruction (int3 in x86). This will cause a trap interrupt that will halt the program and send the signal to the parent process.

In our case, the function we’re debugging is pretty trivial. We just want to know how many instructions we can step through per second, so we’ll use a simple function that runs for approximately the given number of cycles, ensured by running a trivial assembler loop that takes two instructions.

Meanwhile, the debugger has to wait for the signal from the debuggee process, and once the signal it’s received it can take control via the ptrace functionality. In this case, we want to step through the program, each time waiting for the next instruction to complete, while counting the number of instructions that get executed.

It turns out this way of stepping through a program is pretty slow We can only execute 16,200 instructions per second, on a 1.6Ghz machine — that’s a 100,000x slowdown. So a program that would take 1s to execute normally will take 28 hours to step through with the debugger. Ouch.

I’m not quite sure why this is so slow, but I believe it has to do with the way this scheme uses inter-process-communication, with two processes waiting and talking to each other. There are context switches for every step, and the scheduler is involved as well. There’s a lot of overhead.

So the question is, is there way to do it faster. Yes there is.

Stepping through a program using trap-flags and signal handlers

When thinking about this problem, I thought a way to make this faster is to try to stay within the same process. I remembered that linux has something called “signal handlers”, functions that can be associated with linux signals, to intercept signals and handle them directly. For example it is possible for a process to intercept bad memory accesses (seg faults), or to intercept stop/kill signals and perform some action that either fixes the problem or performs some cleanup before the process gets killed.

It turns out that it is possible to register a signal handler to intercept the debugging signals, called traps. It’s called SIGTRAP.

Now we just need a way to cause traps at every instruction. One way would be to modify the code that is currently being executed, within the trap signal handler, to always replace the next instruction with int3. That sounds like a lot of work.

Another way is to set the trap flag of the x86 status register. When set, it will cause a debugging interrupt after the execution of every single instruction.

The execution of our program would look something like this: 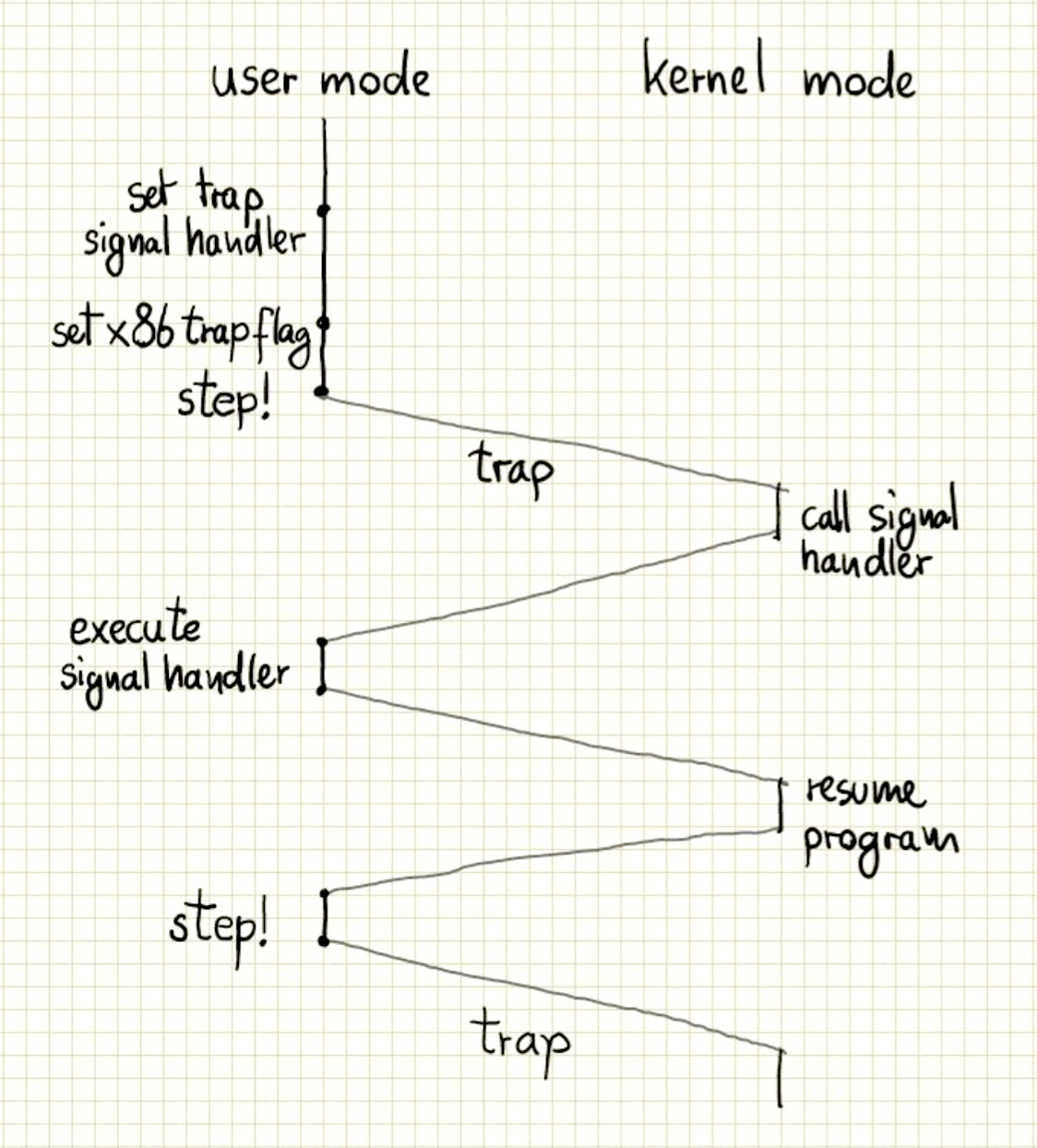 Note that instead of having the execution flow between different processes, it only switches back and forth between kernel and user mode. So hopefully this is much faster.

The question is, does this actually work?

Well, let’s try it. First lets create a signal handler that will be executed every time. That’s our debugger. Again it will count the number of instructions:

We also need a way to set/reset the trap flag, we’ll use assembler again:

In order to start and stop tracing a program, we’ll register the signal handler, and set/reset the trap flag. The stop tracing functions will also print out how many instructions were executed.

Our overall program will start the tracing, again run our “loop” function, and stop the tracing.

When executing, it tells me that 10,000,030 instructions were executed.

It turns out this hack is also much faster than using ptrace. The ten million instructions are getting executed within 38 seconds or so, meaning a slowdown of only about 6000 using trapflag-tracing.

Our tapflag + signal-handler hack is more than ten times faster than ptrace. This means 1s of original execution time will “merely” take 100 minutes — a bit more than an hour, instead of a bit more than a day. This definitely should make it possible to record statistics, at least about simple programs.

One issue is that a debugger is not very useful if it has to be inserted into the source code of the program that you want to observe. So next I will explore possibilities to inject this kind of debugging into an arbitrary, already compiled program.

See the code in the github repository.